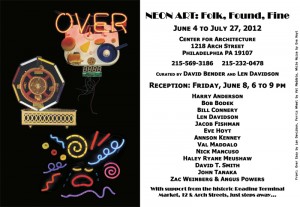 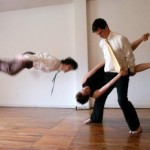 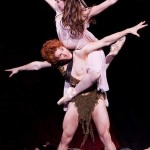 The art of becoming, at the fidget space

The  fidget space is on North Mascher Street just above Cecil B. Moore Avenue, in a little niche of the arts neighborhood around the corner from Mascher Space and between Crane Arts on American Street and Pig Iron’s school on North Second Street.

Dancer/choreographer Megan Bridge and composer/videographer Peter Price opened the walk-up loft at the top of the building in 2009 as a research laboratory for dance, and many local and out-of-town artists have worked in the space. On Thursday, Bridge, Zornitsa Stoyanova, and Annie Wilson danced while performance artist Mauri Walton sketched and drew words backward on the freshly painted white walls. It was called situation: becoming and was as much an art installation as a performance.

At the Friday evening show, I waited outside the curtained-off space with a dozen or so other audience members (only 20 are admitted each night) until we were led inside together. We were asked to remove our shoes and invited to lounge on a white futon surrounded by pillows. This was theater-in-the-round flipped, with the audience in the center of the space and all the action revolving around us.

White Roman shades completely covered the huge factory windows on two sides of the space, blocking the magnificent city views. They act as screens for Price’s geometric video treatments that play around the room kaleidoscopically, dizzyingly, making me glad to be already on the floor.

Stoyanova saunters around us faintly smiling, then stops and leans into us, telling us one by one the secret message, which we must pass on. Wilson rocks sideways on a child’s toy. Then they gather, with Bridge on a couch, looking like beautiful mannequins in their white architecturally constructed costumes (by Heidi Barr). Soon they are prancing or skipping around us, stopping to isolate body parts, with even some subtle popping and locking. Wilson disappears into the living quarters to change into a black jumpsuit number with pops of color, and Walton helps her to roll up the shades to the cityscape.

Price sits behind a paper cutout globe like a wizard calmly orchestrating the nuttiness. Wilson sits chopping long-stemmed carrots, Bridge appears in her bunny suit, Stoyanova dresses in hot pink, dancing with a skull, or digs in a pile of soil, Walton lays objects out around the floor until we are each invited over to the bar for a beverage, and the piece just fizzles out in whispering fun. 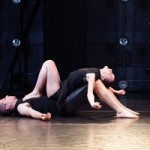