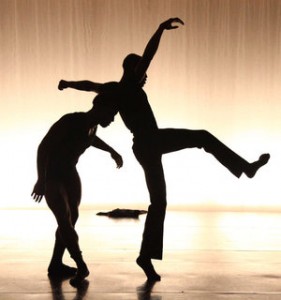 She rivals Cleopatra in power and status

She rose from actress to empress, from prostitute to political powerhouse, as tough an infighter as any man in the labyrinthine Byzantine Empire.

New Zealand native Stella Duffy, who now lives in London, tells the story in Theodora, an evocative historical novel released last year in the United Kingdom and now available in paperback in the United States.

Born about 500, Theodora was the daughter of a bear trainer. Duffy, writing at a quick, cinematic pace, tracks her odyssey from the bowels of the Hippodrome to the imperial palace, where she became the paramour and then the wife of Emperor Justinian I, who by all accounts relied on her judgment.

Some of Duffy’s most vividly imagined passages cover Theodora’s desert conversion to Monophysitism (the belief that Jesus had only one nature, divine, rather than two, human and divine). It was a significant decision in a world where theology and politics walked hand-in-hand and the majority held the two-nature view of Jesus.

In Duffy’s account, Theodora’s conversion takes place during a three-year journey back to Constantinople from Appolonia (in present-day Libya), where a pre-Justinian lover has banished her. She endures the symbolic 40 days and nights alone in a cave. She has visions and delirium and then “she lay in a pool of her own thin blood, the pool spreading rapidly, out and away from her, liquid life pouring away.”

For all the drama of Theodora’s life and all the double-dealing and steamy scenes, Duffy leaves the reader eager for the full story of the rule of the Augusti, the royal couple, but her novel ends with their marriage and coronation. Duffy promises a sequel that will no doubt deal with Theodora’s key role in the brutal suppression of an uprising against her husband in 532, along with the intrigues, earthquakes, plagues, wars, the rebuilding of the great church, Hagia Sophia, and its costs and Theodora’s death in 548.

As Duffy presents her, Theodora combines warring characteristics that alloy into a mettle greater than that of any man of the era. She was ambitious, unscrupulous, wily, but also loyal and compassionate.

Justinian, known as a ravenously intellectual student and lawmaker, is remembered for issuing the Corpus Juris Civilis, the Body of Civil Law. In Duffy’s portrayal, he is a tireless scholar king and Theodora’s ardent and loyal lover.

Duffy cites more than a dozen sources on Theodora from the last several decades. If ever there was a woman whose power, reputation, and stature in history demand the same fascination as Cleopatra, it’s Theodora. Duffy leans most heavily on the elegantly written biograpohy Theodora: Empress of Byzantium (2004), by Paolo Cesaretti, and on the historian Procopius’ Wars of Justinian and his savage Secret History, which reveals his distaste, if not his hatred, for Theodora, his contemporary.

Lately, Duffy has taken some Internet heat for her use of profanity. When it comes from the mouths of former brothel acquaintances, or even Theodora’s own, it rings with authenticity. But the author repeatedly drops the F-bomb as a kind of shorthand for making love. In the passages on Theodora’s pre-Justinian life, it sounds merely lazy. This becomes more grating when she writes about the imperial couple making love. Accounts of their union show it to have been loving and respectful. One of Justinian’s laws proclaimed, “Marriage does not consist in sexual relations, but in conjugal affection.”

Duffy succeeds best with the dialogues she creates between Justinian and Theodora. They are simple, but intimate and caring. After the death of his uncle, the Emperor Justin, Justinian feels orphaned. He asks Theodora, “It is just me now, isn’t it?” She responds, “In the purple?” And he says, “With you beside me.”

Perhaps in the sequel, Duffy will reimagine and eroticize their lovemaking. As a historical narrative, her book is racy and informative, but her unmelodious and dry style is unbefitting a ruler so juicy.

Merilyn Jackson writes on dance, books, and food for the Inquirer and other publications. Her blog is http://www.primeglib.com 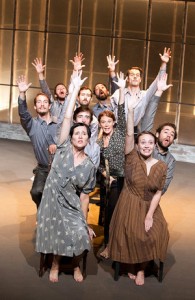 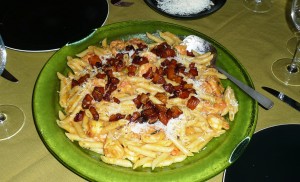 1 ½ lbs. large Gulf or Mexican shrimp (Indonesian tiger shrimp will give this or anything a weird oily taste)

Salt, pepper, a couple of dashes of good cayenne pepper

I watched Giada make her version of this dish and it just looked too bland. It needed kicking up. So here’s what I did.

Peel, devein and clean shrimp. Soak the shrimp in the wine. Place shells in two cups lightly salted water and simmer down until you have about a cup of shrimp stock. Strain and discard shells and continue simmering stock down to a viscous half cup. It should be have a very concentrated shrimp aroma and taste.

Gently boil one bag of squash in salted water until soft. Drain, season with salt, pepper and cayenne. Add ½ cup heavy cream and puree with stick blender. Add more cream if you’d like a thinner sauce, but I’d wait until you pull everything together to see if it needs it. Cover and set aside.

Preheat oven to 400° Dump the other bag of squash into a baking dish and drizzle with honey with one TBS olive oil. Season and roast for about 20 minutes. Stir squash so it begins to caramelize on all sides and continue roasting until it look beautiful. I like it crunchy.

Cook the pasta in salted water.

Heat butter and remaining olive oil on high. Drain and sauté the shrimp until it begins to caramelize, add the garlic. Just before the garlic begins to brown add more wine if you like and the shrimp stock. Simmer it down a bit before adding the squash puree. Heat, stirring until all the shrimp are coated. Chop a quantity of fresh sage (other recipes call for basil, but I think sage and squash are a cute couple) and sprinkle over the shrimp. Add the hot pasta to the pan, stir until coated. Pour into serving dish and sprinkle with parmesan and then the roasted squash.