A Tale of Lost Luggage

This story first appeared in The Philadelphia Inquirer
Sunday, August 12, 2001

Krakow, Poland. The indomitable Joan Myers Brown and her dance troupe, Philadanco, are no strangers to travel. In the 90s, they collected baggage claim checks from Turkey, Italy, Germany, Canada, and the U.K. Last year took them to a dance festival in Korea, which Brown allowed “had its difficulties but was one of the best tours ever. Travel has two objectives: to introduce the company to new audiences and allow the dancers to experience different cultures.”

In July, Philadanco found a lot more about how the new world is ordered after spending ten challenging days in post-communist Poland. The company was invited to perform at the Eighth Annual International Contemporary Dance Conference and Festival in Warsaw and two outpost cities, Poznan and the host city, Bytom, located in the economically depressed coal-mining region of Silesia.

For many Poles this was a new exposure to a high-profile Afro-American troupe whose repertoire ranges from vernacular dance to stylized modern ballet. Responses ranged from multiple curtain calls to remarks from arts cognoscenti with expectations of more edgy choreography from an American company.

But choreographer and director of the Silesian Dance Theater, Jacek Luminski, was not necessarily looking for edge when he visited Philadanco and Baryshnikov’s White Oak Project (administratively based on Rittenhouse Square) in Philadelphia last October to engage them for his two-week event. White Oak was to open the festival and Philadanco to close it, with companies from around the world in between. “I wanted Polish audiences to see these two very different streams of American dance,” Luminski said. “Philadanco is an extreme contrast to American post-modern dance, dancing with such joy. Just right for our gala finale.”

For the 16-member Philadanco troupe, the road to the finale near Bytom ultimately proved more frustrating than joyous. Just getting to Poland was a tricky dance. LOT Polish Airlines, which flies direct from Newark to Warsaw, refused to discount tickets for their party of 16. They had to take a more circuitous route.

At De Gaulle airport, a baggage handler’s strike snarled every process from baggage transfer to passport control. When French officials required an unanticipated visa from dancer Francisco Gella, who holds a Phillipino passport, company manager, Vanessa Thomas, refused to leave without him. Suddenly, Cisco saw their bus, flew down the steps and boarded before anyone could stop him. The troupe followed, arriving in Warsaw just a couple of days late.

Unfortunately, costumes for three of the four works on their program didn’t make it. On the six-hour drive to Poznan, they discussed how to deal with the missing gear.

“OK,” said Joan, tackling the program in order. “The women have their dresses for Echoes (an Alvin Ailey tribute). The men will have to dance in T-shirts and jeans.” Warren B. Griffin III, the tallest of the troupe, and some of the other men protested. “J.B. (the dancers call Ms. Brown, JB or Aunt Joan), how are we gonna dance in jeans?”

“You dance in jeans at the clubs,” she said firmly, “you can find a way to dance in them on stage.”

Gene Hill Sagan’s glamorous La Valse could not have been danced in casual jeans. Fortunately, the waltz-length gowns and the jumpsuits for Cisco Gella and Antonio Sisk made it. At the first performance in Poznan, three petite dancers, Tracy Vogt, Allyson Tripplett, and Willa-Noel Montague, entered swirling in black chiffon, and when Cisco and Warren leaped out, a rustle went through the sedate audience which applauded in Soviet-style unison.  Dr. Grazyna Czarnecka sat next to me and it seemed her favorite, “Very romantic ballet,” she said, “but dark and thrilling too.”

David Brown’s marvelous fluted tunics for Labess II accent the dancer’s flow, but only their briefs were on hand. Unflappably, Brown and the piece’s dancers, Odara Jabali-Nash, Hollie Wright, Tracy Vogt, and lead dancer, Dawn-Marie Watson, raided an open-air market before the first show. “We found four little dresses similar to the wine-colored briefs and took scissors to them,” Brown said. The men danced bare-chested, only in their briefs.

Each of the tour’s three performances closed with Jawole Willa Jo Zollar’s 1998 celebration of the Black Power Movement, Hand Singing Song. Program notes described it as “Afro-Amerikanow-style Solidarity.” All the costumes but the black hats for this dance were lost too.  “Everybody just go to your luggage and pull out anything black,” Brown commanded.

Michael Wimberly’s jazz-based music underscored the ‘60s-period themes, but the dancers worried that Polish audiences wouldn’t get the text and gestures. Ahmad Lemons, the troupe’s powerhouse dancer, had just heard rap sung by a Polish group, and quipped, “It’s the first time I understood the words!” Jazz, gospel, and rap are very popular here.

In Warsaw, Philadanco drew four curtain calls, jeans and all in Stalin’s gift to Poland, a hideous building called the Palace of Culture. The audience responded enthusiastically to the dancer’s exaggerated street walking and upraised fists. Warszovians joke that the Palace is Warsaw’s best address, because from there you can’t see it. An intimidating Communist-era staff still runs it; its priority is to maintain order, not to be helpful or hand out programs. In other festival venues, staff wasn’t able to prevent theft in the dressing rooms – dancers from Israel were robbed backstage in Krakow.

Philadanco’s last concert was in a theater in a small town near Bytom. Like a frontier town, the host city, Bytom, has public drunkenness, a sizeable red light district, few restaurants, and only one grimy hotel – ill-equipped for the likes of Brown, her mostly African American troupe, and Baryshnikov. (A van whisked Baryshnikov and company to an elegant Krakow hotel an hour away.)

Walking through Bytom’s main square, some of the Philadanco dancers were called monkeys and animals in English by people who also threw things at them from a window above. New York’s famed LaMama Theater founder, Ellen Stewart, visiting a concurrent theater festival in Poznan, was similarly insulted while being refused service in the Sphinx restaurant there.  (Stewart is also black.)

“Without me,” the unescorted and shaken Stewart said just after fighting off pickpockets on the train down to Katowice and the dance festival, “Polish dramatists like Grotowski and Kantor would not be known in the United States. I was the one who brought them there.”

Poland’s high-culture is stuck in the 19th century, but with a technological foothold in the 21st century, the country has had to make whimsical compromises, “to touch down in the 20th century in only ten years time,” as some here say. The nation teeters between old-time socialist rules and new world service economy in sometimes charming, sometimes discomfiting ways.

The dancers’ initial conceptions of Poland ranged from informed to impressionistic. Kristen Irby, a soft-eyed young man, attended Pulaski High School in hometown Chicago. Lighting designer, Melody Beal lives near a major Polish neighborhood, Greenpoint, New York, so both were familiar with the most ubiquitous Polish foods like sauerkraut and pierogi[cq] and the sound, if not the meaning, of the language. But most of the group, who range in age from 18 to 32, had a spotty knowledge of Poland. Willa Noel-Montague holds a B.S. in psychology from Temple University and just returned to the troupe after a six-month scholarship at Columbia University. “I imagined it was all countryside,” she said, “like the Poland Springs water label.”

Romnee Marisa Hayes, at 18 the wide-eyed freshman of the troupe, said that she liked, “how open Warsaw is, with the tall buildings spread apart by parks and wide streets.” She didn’t know the streets were widened after the Nazis destroyed it, block-by-block.

This tender, but very mature group decided early on to visit the concentration camp at Auschwitz, a short drive from Bytom. “We were all divided at first,” said Odara, “but then we decided we might never get back here and that we should go.” Tracy Vogt, from Erie, PA, had Polish grandparents and learned for the first time, that besides the Jews, many Poles, gypsies and homosexuals were also murdered there.

Throughout the trip, Brown mentioned her own German-Jewish grandmother. When the guide told them that you’d have been taken here for having a Jewish grandparent, she said, “My God, I’d have been killed on two counts.”

Asked how she’d evaluate the trip, Brown said, “In Poland, we saw how they still live with their terrible war experiences and economy, but also their centuries old architecture and churches, their foods, their great shopping. The racial slurs are to me universal prejudices, often fueled by film and television. It is never an expected overt action, but it happens all over the world. We just live it. Despite this and the travel problems, we took back important and good memories of Poland.”

This story ends with a Philly twist. At press time the costume trunk was still missing. “Last time we heard from Air France, it was back in Paris,” said company manager Thomas. “To be sure it got here, we thought of asking them to put it on the same plane with Ira Einhorn.”

While the days are still cool, I need to make Barsch Czerwona like my Polish babci did, adding blood red beets to the loamiest of beef stocks I can brew. If I am lucky enough to have some dried white-capped Borowiki mushrooms from Poland, I can make the stock so dark you’d think nothing could penetrate it. But only a few beets redden and lighten the broth, heightening its flavors from the nether regions to ethereal ecstacy. If that seems hyperbolic, just watch someone’s face during the first deep sips. I’ve seen people close their eyes in what seems like prayer.

So at James one recent rainy night before the heat turned us sticky, I ordered the Borscht. Chef Jim Burke deconstructed the ingredients of a very faithful Borscht (the Russian spelling, there are Ukrainian and Lithuanian versions as well) and reconstituted them into a pretty plate painting.  Three rosettes of pale sorrel foam, snuggled inside a curved tangle of wilted bright green sorrel & shredded beef with bright red quartered and steamed baby beets nestled on top. When our server poured the hot dark consomme into my bowl, I nearly swooned from the aroma. It took me back to barschs past, especially to one I drank from the thinnest of china tea cups in a restaurant near Wawel Castle in Krakow… 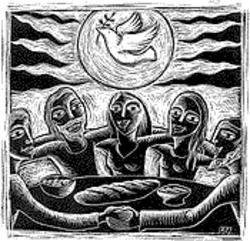