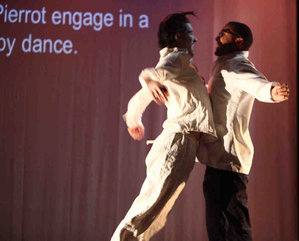 fidget: Salon dance spreads out in a loft 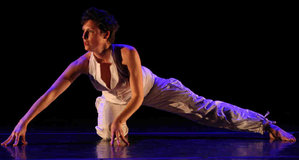 Megan Bridge in “F(Dot)GOS (or) Friendly Dancer of the Giant Outer Space.”

Lately we’ve seen a lot of small salon-style dances – often in people’s living rooms – that take place so close to the audience that it’s difficult to tell the difference between performer and viewer. But the loft residence of dancer/choreographer Megan Bridge and composer Peter Price occupies the whole top floor of the building housing Mascher Space Co-op (of which Bridge and Price are members) on the first floor of 155 Cecil B. Moore Ave.

During the weekend, they presented three “choreographies” in the performance space across from their living room, which they had just retrofitted with nifty interior storm windows, rendering the space (and concept) – which they call “fidget” – less frigid. The couple hosted Washington-based dancer/choreographer Kelly Bond and dancers Lillian Cho and Melissa Krodman in their performance work Elephant, seen at the 2010 Philly Fringe festival.

Notes on WHO WALKS

“Imagine this case: I tell someone that I walked a certain route, going by a map which I had prepared beforehand. Thereupon I shew him the map, and it consists of lines on a piece of paper; but I cannot tell him the any rule for interpreting the map.  Yet I did follow the drawing with all the characteristic tokens of reading a map. I might call such a drawing a ‘private’ map; or the phenomenon that I have described “following a private map.” (But this expression would, of course, be easy to misunderstand.) Could I now say: “I read off my having then meant to do such-and-such, as if from a map, although there is no map?  But that means nothing but: I am now inclined to say “I read the intention of acting thus in certain states of mind which I remember.” # 653…page 168

Although you probably don’t need Wittgenstein to tell you, neither thinking nor language is exact enough to capture what goes on in our lives. Who Walks is the second part of a play I wrote called, Certain Explanations: Magical Walking. That was a solo performance that centered on a character’s encounter with a woman who talked about walking and the occult.  She was never seen in the play and it was possible that she was a figure in his imagination. This reminded me of Sigmund Freud’s essay on Wilhelm Jensen’s novella, Gradiva, which explores similar delusionary events.  In Gradiva, a young man visits the ruins of Pompeii and sees a statue of a woman. She appears to be walking (perhaps, just as the volcano was about to erupt) and he dreams and fantasizes that she is still alive and wants to speak to him. Wittgenstein, unsurprisingly, was dismissive of Freud. He called psychoanalyses “a powerful mythology” but, nevertheless, had interesting things to say about Freud’s methods, like:  “One may discover certain things about oneself by this sort of free association, but it does not explain why the dream occurred.” For me, as he does with maps and trees, Wittgenstein is always concerned with issues of certainty and explanations. After reading him, or Freud for that matter, there is nothing you want to do more than take a walk. (Freud has his acts of walking, too, but that is another story.)

There are trees, there are leaves, there are the changing seasons. Through our lives, we come to know certain trees – ones from childhood that we climbed, a tree we see every day outside a window, a tree we sit under in a city park or with a lover.  Even so, the trees of our neighborhoods, those along the ways we walk or drive through are just there (and never figured in maps). The number of tress in the world might as well be infinite. Trees live and die, burn, are cut down; most of them can live hundreds of years. (Wittgenstein wrote about trees quite a bit. I like these lines: “What an odd question: ‘Can we imagine an endless row of trees?’! If we speak of an ‘endless row of trees’, we will surely still link what we mean with the experiences we call ‘seeing a row of trees’, ‘counting a row of trees’, ‘measuring a row of trees’ etc. ‘Can we imagine an endless row of trees?’! Certainly, once we have laid down what we are to understand by this; that is once we have brought this concept into relation with all these things, with the experiences which define for us the concept of a row of trees.”)

As a philosopher, Wittgenstein is suggestive; as a writer, his ideas and use of language can be startling.  For me, ideas are like trees:  some are always in the same place and they grow and change as thoughts, like leaves take shape and fall way. A few ideas develop and are deeply rooted. Squirrels and birds take residence and write novels. Insect tribes trace their own alphabets and develop ecosystems with the lives they lead inside. They write elaborating texts on the skin and bones of the tree. Bark is the cover of a book, branches spiral into libraries, leaves, leaves. leaves. The trees flourish or just stay there, necessary, decorative; some are hidden by other trees, depending upon which way you walk. In forests, trees have friends and family.

There is also the wind, a character in every outdoor performance. It is motion and indifferent to what a tree looks like after it passes. The trees of my imagination catch poems and songs from the breezes, bend in the gales and twist when a sheet of wind leaves surprises in the leaves. “There was a time when the trees were people and the people trees,” I once wrote, not having the slightest notion what that meant. Around that time I came to understand how trees can walk, and I like the sound and idea of that sentence, but I do not understand it anymore. Sometimes, the words just work together without out knowing why.

Alphabets, trees, words, walking, Wallace Stevens, Wittgenstein, memories lost, found, lost again, maps, books, magic, stones, statues – which might as well be trees – these are dances and sites on the streets and paths of my wanderings over the years. There are other pieces in the puzzles of my concentration and certain explanations that are usually neither certain, nor explanations. Music is always present. Walking can be ordinary or magical.

I wish I knew more and had other words, other things to say – about love, for instance – but it is impossible to remember every leaf, trees from forests, the arcane geometries of branches. Walt Whitman told of finding an oak growing in Louisiana. He “broke off a twig with a certain number of leaves upon it, and twined around it a little moss, And,” singing, “brought it away— and I have placed it in sight in my room.”  Some of us do the same with bit of paper or stones. “Ideas too sometimes fall from the tree,” Wittgenstein wrote, predictably.

By the way, some of the lines in the text are from Wittgenstein’s writings. He would probably think this entire project is nonsense. Freud would have other explanations, for certain.

“Who Walks” debuts at West on Saturday 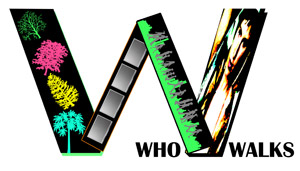 “Who Walks,” just like the Mounds Bar and Almond Joy, is “indescribably delicious.” Indescribable, because it is difficult to pay proper homage in only a few words to the ArtSpace West dance and theatre performance created by Arthur Sabatini, an associate professor in the New College of Interdisciplinary Arts and Sciences. Delicious, because it emcompasses so many art forms in a single setting.

Mark your calendar for this Saturday (March 5), 7:30 p.m., in ArtSpace West on the second floor of the West campus University Center Building (UCB), and see for yourself.

“Who Walks” is a continuation of Arthur (AJ) Sabatini’s 2008 play, “Certain Explanations: Magical Walking,” which debuted at Second Stage West on ASU’s West campus. The performance takes up the original “Magical Walking” story scripted by Sabatini. This latest offering features dance, music, conversation and video in a tale of a mysterious woman in a cape, who resembles an ancient statue and moves in the thoughts of a man writing at his desk. Crowds appear and walk as if in a memory coming alive. Sabatini’s creation is a multi-media collaboration with Philly-based composer Peter Price, dancer Megan Bridge and Phoenix videographer Robert Kilman.

For the rest of the story and more information, click here.