A festival of ‘Universal African’ dance

Sochenda means “the traveler” in Dagomba, a language of northern Ghana, and is the title of the featured dance in the 2005 Dance of Our Ancestors Festival presented by Swarthmore College and Temple University.

Choreographer F. Nii Yartey, creator of Sochenda (so-CHEN-da), arrived from Ghana at Philadelphia International Airport last week toting enough titles to wear down any baggage handler. He is artistic director and choreographer of the Ghana Dance Ensemble, a senior research fellow at the University of Ghana, project director of Noyam Contemporary African Dance Research Project, and president of the National Committee of the International Dance Council of UNESCO.

Moreover, when asked what his name means, he said Nii was actually a royal title. “Something like ‘Your Highness,’ ” he admitted with a slight giggle. “I come from a royal family, the Ashantes. Yartey is really my given name.”

This first celebration of African-based dance begins Sunday with a public reception for Yartey. The festival culminates in performances at Temple and Swarthmore, which are cohosting the weeklong sessions of panels, workshops and lectures, all open to the public, on Swarthmore’s campus.

Philadelphia offers a surprising amount of African and Caribbean-based dance. As if to illustrate this, the DanceBoom! festival at Wilma Theater later this month features dance with African flavor by local companies such as headliner Rennie Harris Puremovement.
Yartey is setting his piece on the Temple University-based dance troupe Kariamu & Company: Traditions, under the artistic direction of Temple professor Kariamu Welsh.

She and professor Sharon Friedler, director of dance at Swarthmore College, conceived of the festival. New Yorker Welsh had traveled to Ghana numerous times, starting in 1977. While she was living in Zimbab-we in the early ’80s, Prime Minister Robert Mugabe asked her to work with the National Dance Company of Zimbabwe; she later became the company’s artistic director. “The dancers were all paid by the government,” she said. “Rehearsal space was extremely humble and the performances were often outside.”

Welsh arrived in Philadelphia in 1985 to teach African American studies at Temple, and soon set about to translate African dances to the concert stage without compromising their integrity. She taught the first classes on African dance at Swarthmore in 1988: “My first degree is in literature, but all things African came to me after I was entrenched in dance.”

In 1995, Swarthmore invited professor J.H. Kwabena Nketia to fill an endowed professorship. “Dr. Nketia is considered the foremost ethnomusicologist in Africa,” said Friedler, who has studied African dance since the ’70s, “and he played a very strong role in forming the African wing of our [Swarthmore’s] World Dance Cultures program, inviting me to spend my sabbatical in Ghana in 1997.”

“The people Kariamu and I had contact with in Ghana overlapped,” said Friedler, “and eventually we both met Nii and began to plan these annual festivals. Next year we will have Sir Rex Nettleford, head of the National Dance Theatre of Jamaica.”

Yartey said his soul-searching piece was “inspired by the problems that all of us have as humans. Life is a journey of pain, but there are moments of happiness.”
Ghana Dance Ensemble member Joshua Trebi is guest artist. He will perform a solo in next week’s Friday and Saturday programs at Temple and Swarthmore, which will also include three of Welsh’s own works. During rehearsals, the dancers imitated Trebi’s crouching, hunterlike, “traveling” movements.

When asked if the Americans were meshing African movement with their own previously learned techniques, Yartey said they were doing this very well: “I am measuring them not by the standard that would be used in my village or on my company, but rather I see each body as a sponge that is dipped in a liquid and that liquid is squeezed out by each in his own way.

“My perception of dance is not limited to where I come from,” he continued. “I am a universal African. Any cultural values that are compatible with my own I can use it.”

The performances will be dedicated to the tsunami victims, Yartey said, “because their journey is now in the spiritual world.” 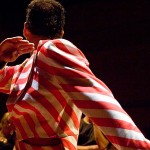