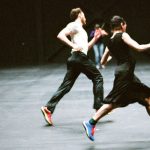 Postmodernist art practice supplanted the avant-garde in the latter decades of the last century, but artists still dig far into the past for inspiration, making the arts a profession heedless of time, at least in terms of researching material. Anachronism and baroque music are sources as valid as minimalism, pastiche, and pop culture. Some young choreographers of the nondance movement (begun in the ’90s) enjoy as much respect and interest as today’s hottest ballet choreographers.

At FringeArts on Sunday night, one such French choreographer, Boris Charmatz, performed a duet with acclaimed Belgian choreographer Anne Teresa De Keersmaeker. Last fall, De Keersmaeker’s company, Rosas, appeared at FringeArts with her germinal 1982 Rosas Danst Rosas. Known for relying heavily on 20th-century composers such as Steve Reich, Alban Berg, and Arnold Schönberg, De Keersmaeker has used Mozart and gone back to Bach. In the postshow talkback, they said they saw Bach’s Partita 2, the name of the work, as a trio with French violinist Amandine Beyer. She began the performance playing alone in the dark for roughly a quarter-hour before leaving a silent stage to De Keersmaeker and Charmatz.

Like a sundial shadow, a rectangle of light traveled along the back wall, marking time passing as the two followed outlines of intersecting chalk circles, running side by side, doing half-turns, reversing course, stretching upward like divers, skipping sideways. Like tectonic plates whose relative motion determines the type of boundary created, they veered off each other, diverging, transforming the spare space with each directional change. When, at last, Beyer returned to play, we had forgotten her absence, so vivid was her earlier playing still dancing in our heads. The dancers sang briefly, deepening the dimensions of the music.

Partita 2 had its world premiere in 2013 and its North American premiere last week in New York.

At the talkback, instead of predictable questions like how or when did you think of doing this duet, I’d have asked about the chalk circles. Were they geometric maps for them to follow or were they astronomical? Or, of De Keersmaeker: When Charmatz was walking, you were lying on your side matching his steps, foot to foot as you rotated within the circle he made, was that a form of mirroring? Shadowing? And just how did you engineer that seesawing weight exchange you repeated twice?

Charmatz turned London’s Tate Modern into a Musée de la Danse in May. Drexel University will host a performance of his 2010 Levée des conflits, copresented by the Fringe Festival, in September. I’d rather see what effect his work with De Keersmaeker has on him.