Friday, June 1, 2012
By Merilyn Jackson
FOR THE INQUIRER

Dance of the lower-case companies! Kate Watson-Wallacer, and Jaamil Kosoko are dancer/choreographers who recently formed anonymous bodies, and Megan Bridge and Peter Price, who make up a team they call fidget, have paired up this weekend at Christ Church Neighborhood House. Both partnerships engage in dance theater, live music, on-site installation, multi-media, social justice and political themes, and audience involvement. In a trend that’s been growing, if diminutively, they titled their show “us.”

Another trend that’s been around for awhile has the performers on stage in costume and going through their paces before the show actually starts. Watson-Wallace, in a red jumpsuit, and Kosoko, in crimson-sequined crinolines around his neck instead of his waist, wore tinselly wigs that made them look, appropriately enough, like July 4th sparklers. The program notes said they were attending a funeral for the United States. But although they looked solemn, danced with flags, and Watson-Wallace took a series of violent death drops, there was little to suggest a funeral.

They better reached their intention to defy genre, gender and identity when, Kosoko changed to a white suit, Watson-Wallace returned to the stage in a black suit, and both rolled their T-shirts up over their heads. Hiding their faces made them anonymous. Exposing their chests — black male skin in white and white female skin in black — made quite a nice statement, but not enough to flesh out this unfinished piece. Prior to the show they invited the audience to check out the scant “installation” on stage, but it piqued no one’s curiosity.

In Kosoko’s solo, other.explicit.body, he wore a cut-up sweatsuit graffitied with slogans: “Black Power” across his bottom. To live music by Brandon Shockley with a voice-over NPR interview of novelist and essayist Touré, Kosoko shadow boxes, drags a netted basketball around chained to his ankle, and writhes on the floor. Whether in defiance of or compliance with all these stereotyping props, he picks up books on black dance and the black body from a stack and reads their titles before slamming them to the floor.

Fidget’s Subject in Two Parts was reprised from four years ago, when I reviewed it at Community Education Center. Bridge, as ever, is a riveting dancer, whether deconstructing Jack Cole’s choreography for Marilyn Monroe in Gentlemen Prefer Blondes, projected and distorted behind her by Price, or standing naked pulling ticker tape from her mouth. In the second part, the electric presence of Annie Wilson joined John Luna, Lorin Lyle and Rebecca Sloan, recharging the group dynamics and the piece. And so the show was about the body, anonymous or seen. 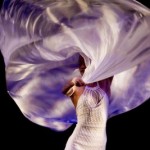