The Koresh brothers – (from left) Nir, Roni, Alon – with their troupe rehearsing for the Come Together Festival.

With the Come Together Festival presenting five nights of dance and the city celebrating the annual Philadelphia Dance Day with free workshops, performances, and a massive dance party on Saturday, you won’t be able to miss dance in Philadelphia this week.

You can either sit through it or get up and do it, but why not do both?

For the festival, Koresh Dance Company is sharing one of its weeks at the Suzanne Roberts Theatre with an ingathering of regional companies, both well-established and upstarts. Choreographer Ronen (Roni) Koresh launched the festival last year with support from PNC Arts Alive.

Koresh emigrated from Israel in 1983, followed by his brothers Alon in 1989, and Nir in 1994. All three had served in the Israeli military, so you’d think anything they did after that would be a cakewalk. But starting Koresh Dance Company and School of Dance in Philadelphia in the early 1990s proved challenging.

The company opened on a Friday the 13th in 1991, and presented its next show a year later at the Warwick Hotel. “I built a stage in the ballroom. We had a cocktail hour hosted by WXPN’s David Dye and Channel 3’s Evening Magazine host Ray Murray, a show at 9 and a dance party till 2 a.m.,” Roni said while sipping wine at a sidewalk table at Twenty Manning recently.

“When I came onto the scene, I had to rely on audiences, not funding. It was flashy. It had to be – we had to satisfy the audiences. We were young and so were they.”

A year after that, their first show at the Mandell Theater had a packed audience and won a standing ovation. “But Nancy Goldner” – then The Inquirer’s dance critic – “tore us to shreds. That was the first shock,” he said. “I didn’t leave my apartment for three days, I was so embarrassed.”

Roni is Koresh’s artistic director, Alon serves as executive director, and Nir directs the Koresh School of Dance. Recently, they signed a deed to a beautiful building at 2002 Rittenhouse St. – a building with a dance history. Laura Keeler, late wife of director of Dance Celebration Randy Swartz, once owned it, and Roni got his start there in the ’80s jazz dance company Waves.

Today, Koresh Dance Company fills a respected niche in contemporary dance – sometimes with a jazzy edge, often with ethnic characteristics, and always hot and hip. As dance company in residence at the Suzanne Roberts Theatre, it joins BalletX, Philadanco, and Pennsylvania Ballet on Broad Street, making Philadelphia the only U.S. city with four major companies dancing within a block of each other.

Koresh begins a 26-city tour in October that runs through next May and includes a festival in Belarus. “I like going on the road because I feel rewarded,” says Roni. “We’re lionized wherever we go, especially Melissa Rector, who’s danced with me since Day 1.”

The Come Together Festival includes mixed programs from Wednesday through Sunday, with Nora Gibson’s geometric ballet, Rennie Harris Puremovement hip-hop, and Brian Sanders’ Junk’s physical theater – among a total of 26 companies – sharing the stage. Sanders “creaks” around in Dancing Dead, which he remounted in suite form with support from the Swarthmore Project this summer. Koresh performs each night with excerpts from its spring premiere of Promises I Never Meant to Keep, Bolero, and excerpts of other works.

Kun-Yang Lin/Dancers performs Be/Longing 2 on opening night. It created a chiaroscuro of light and dark, movement and stillness in spring when he premiered this work, which has been whittled down to a more concise form for the festival.

Raphael Xavier – hip-hop artist, photographer, filmmaker – returns this year to perform Still. “It’s a four-man piece about maturing as a dancer,” he says. At 43, he’s no aging b-boy, though. “I may not be able to do some of the things I could do when I was younger, so this is a kind of transitional exploration. The 23-year-olds I’m working with know how to move, but I slow down and ask them to just react to me.”

Alchemy Dance Company has been performing in small venues around town and shows Beggars and Choosers, “an explosive excerpt of 2013’s Follies,” to music by composer Jonathan Bowles.

Melissa Chisena of Chisena Danza solos in Breathe with percussionist Jonathan Cannon. “Breathing is a universal experience,” she says. “This dance is an exploration of breath.”

DanceSpora was formed in 2008 by Pennsylvania Ballet alum Heidi Cruz-Austin and David Austin, an accomplished house dancer who performed with Renee Harris Puremovement. Cruz-Austin wanted her Trenton-based company to look like contemporary ballet with house and jazz influences.

Danse4Nia Repertory Ensemble performs an excerpt from Falsely Accused to music by James Blake and choreographed by Itola Byrd. It’s a tribute to women unfairly or unjustly accused of crimes they did not commit.

Ballet Fleming presents an excerpt of a staple of its repertory, a lovely, lyrical work to American composer Paul Schoenfield’s Cafe Music.

A schedule of events is at philadelphiadanceday.com. 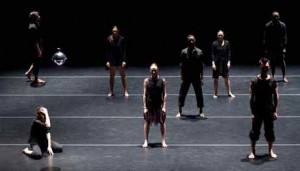 Those of us who critique the arts go wild with delight when an artist we’ve been watching for many years creates a work that transcends all he has done before. Thursday night Koresh Dance Company opened its spring season at the Suzanne Roberts Theatre with artistic director Ronen (Roni) Koresh’s Sense of Human, an evening-length piece that I would call his masterwork to date.

The program opened with choreography by Melissa Rector, Koresh’s spitfire star dancer since the beginning, 19 years ago. Rector set her Flight on the Koresh Youth Ensemble, and its 11 young women soared. There were Africanist stompings, grotesque gyrations, and the kind of angsty angularities that contribute to the Koresh “look.”