November 08, 2012|By Merilyn Jackson, For The Inquirer

Three works by Italy’s Mauro Astolfi crown this fall’s dance season in Philadelphia, as a flurry of new pieces – from him and others – take to two local stages only a week apart.

Arriving in Philadelphia from Rome just before Sandy, Astolfi worked through storm-related delays to make Instant God for BalletX, which the company is premiering this week at the Wilma, along with new work by Matthew Neenan and Kate Watson-Wallace. And next week, Astolfi’s highly regarded Spellbound Contemporary Ballet debuts here with two Philadelphia premieres presented by Dance Celebration at the Annenberg Center.

Spellbound has been touring the United States on a subsidy from New England’s National Dance Project, the only European company to be chosen last year by the project. When BalletX cofounder Christine Cox saw them in New York in January, she sensed Astolfi’s sensual yet cerebral choreography would be a good fit for her company, and it wasn’t long before a BalletX commission was set.

“Working as a freelance choreographer in Europe,” Astolfi said, “I sometimes find the young dancers complain – about what time rehearsal is over, about traveling too much because they can’t recover. They want to be taken care of. For some, it’s just a job. But you can’t do this work just for money. It’s impossible.”

On the other hand, he said, after only three days of rehearsal, the BalletX dancers already were taking to the shape of Instant God.

“If I were here for a month,” he said, “they would look like my company. These dancers are hungry, and they can do anything. They are professional and don’t just work as a job.”

Dance companies in several countries have commissioned him in recent years, including Chicago’s River North Dance, which is coming next spring to the Annenberg.

He says he never comes to a company with preconceived ideas, “because when I meet the dancers, I just change everything. I need to feel their energy. So I’m trying to create an atmosphere and using an ambient soundscape created by Not From Earth for this piece.”

Neenan, BalletX’s co-artistic director, said, “In less than two weeks, Mauro and the dancers have created a dance that is sculptural, intimate, entangled, and precise.

” Instant God is the darkest work on the program,” he said, “so we decided it should open, and my own work Switch Phase, which is more upbeat, closes it. We put Kate’s piece in the middle because it contrasts with both – it starts dark but gets funky, wild, and fun by the end.”

New York Times critic Alastair Macauley wrote warmly about Switch Phase after its world premiere over the summer at the Vail International Dance Festival and recently praised Neenan’s Party of the Year, saying the choreographer “is emerging as one of today’s foremost dance poets of American behavior and society.” Switch Phase was originally presented with the string quartet Brooklyn Rider performing onstage; here, the music will be recorded.

Watson-Wallace has been the Philly dance scene’s It Girl for more than a decade and received a Pew Fellowship in 2007. She may be best known for her Live Arts Festival trilogy House, Car, and Store. ( Car was performed for an audience of three in the backseat, surrounded by spectators who might have been witnesses to an accident.)

Those were site-specific works for small spaces, but last year, she began choreographing again for the stage. For BalletX, she’s made I Was at a Party and My Mind Wandered Off, which she calls a “nonlinear work that functions like a dream, a lot of washes of imagery – some futuristic and some animalistic or from nature.”

Fans of the impishly sexy and versatile dancer Tara Keating will be sorry to hear that this run marks her final appearance with BalletX. Keating danced with Pennsylvania Ballet from 1998 to 2008 and, in her last three years there, was also a founding member of BalletX, in 2005. She will continue as artistic coordinator and become the company’s ballet mistress.

In Dance Celebration’s program next week at Annenberg, Spellbound, which Astolfi formed in 1994, performs Lost for Words and Downshifting. While Italy is not short of highly regarded contemporary-dance companies and choreographers, Astolfi and Mauro Bigonzetti among them, Astolfi said that politicians and funders have not fully embraced the genre and have given very little support. They back traditional art forms, “the classical,” he said.

“To us, they say, ‘Oh, you’re fantastic, you’re one of the best companies – we’ll help you,’ but they promise, and they don’t fulfill their promises. Their words are empty. This was the inspiration for Lost for Words.”

Downshifting “is like the person who is changing the quality of life, maybe changing his job or going in another environment,” he said. “And we were changing some of our dancers and moving away from Italy a bit, and so I found this word in English, and I thought it was the right title for a dance.” 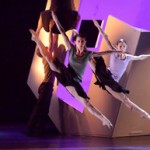