A dancer steps into ‘The Rape Play’ 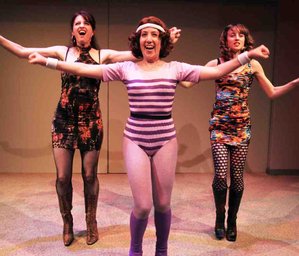 There’s theater, dance, dance theater, musical theater, physical theater, and variations with multimedia and new media. The lines differentiating them have been blurring throughout the past century, especially in the last 30 years or so. And in Philadelphia the pairings and sharings among disciplines have blended in some surprising ways, among them That Pretty Pretty; or, The Rape Play, which Theatre Exile opens here this week – with a dancer in a major role.
When Sheila Callaghan’s controversial play premiered last year in New York, it was variously reviewed as tricky and darkly funny or raunchy and only partly successful. It begins with two women in a hotel who entice an anti-abortion crusader into their room and murder him; the scene is immediately replayed with two men who kill a hooker. For the rest of the play, Jane Fonda flits in and out of these scenes like a misguided Tinker Bell, sprinkling feel-good happy dust over the carnage.
Read more: http://www.philly.com/inquirer/magazine/20101116_A_dancer_steps_into__The_Rape_Play_.html#ixzz15Tuvgotg