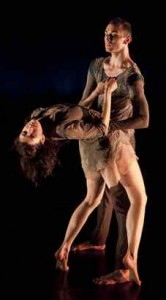 Jeanne Ruddy Dance now consists of 10 dancers, and Ruddy has entrusted Soil to two of her most accomplished dancers, Janet Pilla and Christine Taylor (who dance on alternate nights), and has added a second section for five women.

A decade ago I found the dance mawkish, and wondered whether the coil Ruddy used as a prop symbolized an umbilical cord or an IV tube. Now I see that it is really both lifeline and mortal coil. Pilla danced the role convincingly on Thursday evening, but had just as much trouble shuffling out of the ungainly coil as Ruddy had had. But then, a threat like cancer is not easily conquered.

In the second section, the dancers, in Jeffrey Wirsing’s flowing white costumes, raced across the stage, flying bolts of red chiffon behind them, painting a picture of life redoubled in intensity and joy. Ruddy joins them, as if bestowing courage and grace.

Not life but death is the subject of Breathless, the dance that followed. Ruddy based Breathless, which premiered in 2005, on tabloid headlines of sensational murders. In it, Ian Dodge, Rick Callender, and Hershel Deondre Horner III variously seduce, control, and ultimately murder three women, Gabrielle Revlock, Meredith Riley Stewart, and Pilla. I first saw it in 2008, and it is much tighter now in story line and choreography, and so all the more riveting.

Dodge connects with his inner murderer early on, while Callender and Horner are more like accidental tourists, finding theirs circumstantially. Once again the pole dancer who ensnares the men, is scandalizing. I do wish the dance could better match the fluidity of Jorge Cousineau’s video projections, but enjoyed hearing Ellen Fishman-Johnson’s noir score again.

Although watching Dodge switch from villain in Breathless to lighthearted swain in Lark was fascinating, the decorous quintet from last year is Callender’s realm. His striking port de bras would be envied by any ballet danseur and brought the right touch of courtliness to this work.

Thayne Alexandra Dibble was the piece’s spring flower, joined by Pilla and Taylor flitting and flirting about with the men. This Lark sings of new love. O April.