Another Titanic night to remember 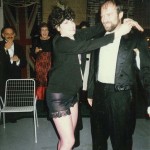 It was sad (so sad):
The night the Titanic went down, again

It was a night that we would remember, but the people in attendance would like to forget. Especially the hostess.

Dateline: Philadelphia, April 15, 1987. Party to commemorate the 75th anniversary of the sinking of the Titanic in a loft near South Street. The invitations were embossed; the affair— as we found out— included a replication of the final night’s menu: oysters, consommé fermier, cock-a-leekie soup for first courses, a buffet with potted shrimps, round of spiced beef, corned ox tongue. A well stocked bar, champagne everywhere.

The loft was meticulously decorated for the occasion. In fact, the hostess was an artist working as a free-lance set designer and food stylist for local advertising companies. With her artist’s eye and attention to period detail, everything from the sculpted white drapery to cut glass clamshell ashtrays sparkled with the prim elegance of Edwardian First Class comfort.

Guests were invited to dress for dinner and, fully in the spirit, men wore black lapel buffed tuxedos and the women gracefully sipped cocktails in floor-length gowns, their hair coiffed (though the younger, cheekier women made themselves up with Betty Boop curls spiraling onto their cheeks). They swayed to recorded band music— and their dates, mostly what were then called yuppies— waved their ridiculously fat cigars in the air and, as guys unaccustomed to wearing tuxedos, were as puffed up as high schoolers at a prom.

One couple actually didn’t receive a formal invitation. That would be my wife Merilyn Jackson and me. We met Lauren, the hostess, a week or so before at the home of a friend where we all drank wine and laughed, as we did a lot back then. She casually invited us to her Titanic party, and we said sure.

Now, some of our friends in those days used to refer us as the Arthur & Merilyn Show. No need to go into specifics, but antics were us. Had Lauren known us better, she might have thought twice about inviting us to what she had planned as a party to show the city’s hot, up-and-coming advertising people what she could do. This Titanic party would be her showcase. If things went well, one of these potential employers might offer her a job.

The party was slated for a Saturday night, and I spent the afternoon going to used clothing stores in search of a tuxedo, which I found for $5 by about 5 o’clock. I also picked up a pair of blue-and-grey striped, heavyweight engineer-style bib overalls, a comically large monkey wrench and a long, thick rope.

Merilyn, a beauty, rested, having already decided on a flapper chic black dress. Our imaginations, sad to say, reached Second-Class level, at best. But, then, what attracted us was the word party, not Titanic.

By 8 p.m. or so, inspiration struck: This soiree was intended to celebrate a sunk ship, or water, water everywhere. So I filled up a few gallon containers with water and steadied them in the trunk of our unreliable chartreuse Fiat.

From Queen Village, Merilyn chauffeured us over to Kater Street, where I took the water out of the car while she parked. I dropped the bib overalls and monkey wrench– along with Deep Down in the Jungle..Negro Narrative Folklore From the Streets of Philadelphia (by the world famous Penn folklorist Roger Abrahams)– in the entranceway to the second story apartment.

From the street, it looked like a grand party was in progress. A neat young couple, dressed like movie extras, nodded to us on their way in. When the coast was clear, Merilyn slipped off her jacket, we tied the rope around my waist and she climbed, other end of the rope in hand, upstairs in her black teddy, as if the sinking ship had interrupted an intimate engagement somewhere above steerage but below the swells.

As we’d planned, Merilyn poured gallons of water over my head, soaking my second-hand tuxedo. As I trailed a few steps behind her, she burst into the party, squealing, “Help! Man Overboard,” while I, lay on my side in a puddle clutching the rope.

The hired mock maitre d’ at the top of the stairs, greeting everyone and finding their name cards, was the first one to widen his eyes in disbelief.

Moments later, dripping wet as a dog after a swim, I scrambled to my feet, shouting, “Where’s the dame? Where’s the dame?” as if completing the scenario whereby Merilyn and I had been rudely interrupted down below and I swept overboard.

It took only a few seconds for us to read the open mouths, turned heads and perturbed raised eyebrows as signs that joking still wasn’t the accepted tone when it came to the subject of what happened that night when the great ship went down.

But the umbrage from the cummerbunds and frowns from the gowns faded quickly and turned to laughter. Lauren greeted us and seemed amused, even if we had possibly sunk her career.

Merilyn quickly slipped back into her jacket and headed for the champagne and canapés.

I, always one to compound disaster with calamity, returned downstairs, picked up the book, bib overalls and monkey wrench, and retreated to the bathroom to change.

Grabbing a bottle of wine, I found a corner. When a few guests drifted over to applaud my role and ask about my costume change, I read aloud the African-American “toast,” Shine on the Titanic (quoted in Deep Down in the Jungle)

A “toast” is what we might call today a rap. It’s a satire based on a character named “Shine,” who supposedly worked in the Titanic’s engine room. Shine repeatedly tries to warn Captain Smith that the ship is sinking but is ignored. At one point he rhymes:

Eventually, Shine realizes what’s going on and saves himself. The refrain, “and Shine swam on” in Shine’s euphemistic way of saying, “Let the ship and the people on it sink.”

So I sat with my book, wine and monkey wrench, toasting away in my best mock-Shine style. Lauren looked on from time to time to make sure there wasn’t a third act in our show.

So now it’s the 100th anniversary of the Titanic sinking and Merilyn and I have just one question: Is anyone out there planning a Titanic party this month?