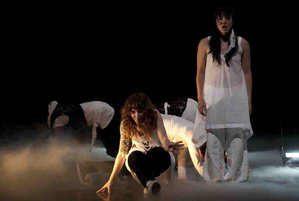 Heaven, Rennie Harris Puremovement’s new hip-hop work for the Philadelphia International Festival of the Arts at the Perelman Friday night, premiered hellishly late when the stagehand could not work the fog machine that was to have put us all on cloud nine.

Long white panels hung from fluorescent rods (James Clotfelter was lighting and scenic designer) and eventually were raised above the dancers’ heads to act as projection screens. After the show, Clotfelter lamented that his lighting on the fog would have made it look so cloudlike.

This kind of mishap can throw a show off, and it did just a tad, with a fitful start and such faint animation by Spencer Sheridan that I later wondered if there had also been a problem with the projections. Nonetheless, Harris’ company, four men and 10 women, built itself up to a forceful performance, heralded by a wobbly arrangement of Stravinsky’s Rite of Spring, one of the festival’s touchstones.