The Cousineaus in full retrospective 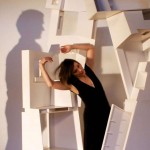 Watching and reviewing Niki Cousineau’s choreography and dance for more than 15 years, I have noted a certain delicacy, even reticence, coming through. She’s not a flashy, over-the-top mover, but allows her intellect and commitment to craft to put her dance theater work over.

It helps that in 1996 she hooked up with the precision-minded Jorge Cousineau, an award-winning set, lighting, and sound designer. As the duo that has constituted Subcircle since 1997, they unveiled their latest work Thursday at the Performance Garage for a weekend run that ends Saturday night.

Their title is “All this happened, more or less,” the opening line of Kurt Vonnegut’s Slaughterhouse 5, which centers on the World War II firebombing of Dresden, Germany, Jorge’s birthplace. His set consists of crazily tilted white structures that could be from a Fritz Lang film. The dancers easily break them down and realign them, or make them explode into the rafters.

Jorge made his performance debut dancing with wife Niki. He moves quite naturally, if a bit shyly, in this piece that serves as a retrospective of their work, life, and love together. The other dancers – Christy Lee, Scott McPheeters, Christina Zani – had each performed with Subcircle, and helped move the memories along by calling out the years as they danced.

The Cousineaus opened in silence with sign language, later ending with little arabesques. Sections were taken from shows such as 2000’s “Banking Hours,” and 2002’s “ADA,” the inaugural show at the Performance Garage. Much of the movement, once in full swing, had elbows jutting back and other angular moves echoing the architecture of the set.

Rosie Langabeer’s guitar chords warmed the atmosphere, and Jorge’s video projections, live and taped, enlivened the white set, falling on the structures and screen backdrops. Fast-forward to 2048, and they “draw” each other’s outlines on a screen with a projector. Niki draws water through them, dissolving their outlines in mist. As Jorge quotes Vonnegut: “So it goes.”