Can you say Wigilia?

For The Daily News 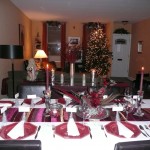 My Italian husband balks at food that isn’t red or green.  When I brought him to his first Polish Christmas Eve supper, he looked at our food, exclaiming, “Everything is brown!”  We surveyed the landscape of our table — a sable sea of black mushroom soup steaming in Grandmom’s tureen, an amber knoll of sizzling pierogi, a tawny marsh of kapusta, a russet hill of fried smelts and on the sideboard, golden pyramids and snowcapped mountains of cookies and said “So?”

Whether you’re Polish, Portuguese or Rumanian, if you are of European Catholic background, chances are you share the same custom of a meatless Christmas Eve dinner. Italians call it Night of the Seven Fishes or Vigilia.  Poles call it Wigilia (vee-ghee-LEE-a) for vigil.

Vigil has a history that predates Christmas by many centuries. Falling on winter solstice, it honored the Roman god of agriculture, Saturn, whose fairness inspired forgiveness and sharing.  The word “companion” is derived from the Latin — with bread — and illustrates a custom unique to Poles.

The hostess greets you on Wigilia with Oplatek, a flat bread wafer. You share it with other guests and family, signifying that none of you will let the others go hungry in the coming year. Whether Poles live in Bridesburg, Brisbane or Bialystock, they mail the wafer to each other to stay in communion with far away loved ones.

As if mindful of the snow that blanketed Bethlehem that first night of the Christian era, milky damask covers Polish Wigilia tables. Tucked beneath the cloth, strands of hay symbolize the manger. Icy silverware and crystal stemware spike each place setting. Your senses, rattled perhaps by last minute shopping and preparations, are assuaged as you run a fingernail across the crisp cloth to release the comforting aroma of boiled starch.

There is always a moment before the meal is lain as silent and thoughtful as the last swirls of a snowfall.

Supper begins when the youngest children, called the Starwatchers, sight the first star.  They begin yelling “Jest, jest,” (is, is) and the kitchen bustle goes from simmer to roiling boil.

Dried mushrooms gathered in Poland’s birch forests star in this meal.  The best, Borowiki Bialy (bore-owe-VEE-kee bee-AH-wee),are white-capped mushrooms far more pungent and meaty-tasting than morels.  And more dear too.  Running about $100 per pound in the states, it’s no wonder Polish travelers hazard smuggling them back with them.  Once, our aunt lined her girdle with plastic sheathing and stuffed two pounds of broken-up mushrooms into it.  She flew back to JFK with them poking her ribs.  They made the best soup we ever had.

In a train station in Poland’s Silesian Mountains this fall, I saw dozens of flannel-shirted, unshaven men disembarking with heavy baskets. They were filled with a treasure of fresh mushrooms to be dried and strung for export or sold by the roadside.  For $30, I successfully smuggled in about a $100 worth this year and we will make our soup and sauerkraut with them.  I don’t know how good they will be.  I just brought them over in my handbag.  I don’t wear a girdle.