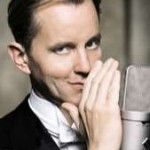 I don’t know why you’d call German a guttural language, especially when you hear it sung. Depending on the singer, it can be soft and lush like Polish, leering and lurid like English, or seductive and sexy like French.

A singer who captures all these nuances and thousands more is Max Raabe, whose burnished baritone voice veers on the oleaginous with its faux-obsequiousness and then slides into girlish sincerity. Raabe does this by sending the voice exactly where he wants it. Whether he stretches his lips into a large O to throw it to the roof and back of his mouth for a falsetto or relaxes his chin into his chest to drop it into a lower register, he brings it to light with elegant deliberation.

Sometimes Raabe pitches it into his sinuses so that it takes on a more sinister quality— read the silly-sounding word dunkel in German, for sinister. In this instance, dunkel would be a perfect English word for the quality that skirts the edge of the absurd and the contradictory senses underlying everything Raabe sings.

He appeared at the Merriam Theatre for one night only with his Palast Orchester, which was formed with Raabe in the 1980s and still includes many of the same musicians. I’d downloaded some of his songs on my iPod and owned some of his CDs and watched him on YouTube, but I’d never had the chance to see him in person until that night.

The experience was anachronistically transporting in the strangest way. Rather than bounding onstage like a vaudevillian or like a louche Weimar cabaret singer of the ’20s and ’30s from where many of his songs spring, Raabe seduced us with his calm intensity, elegance and faux-naif reticence. His pomaded hair, white satin bow tie, tails and patent leather shoes— even his gracile and courteous body nodding his temple away from us as he repairs to the piano to give the musicians some solo moments— all speak of a gentler time, before the unspeakable crimes committed in World War II.

Of course, Raabe carefully never allows any sort of hubris to allude to that grisly episode, as if he hoped time would have stopped while all this delicate and amusing music was popular. And in that suspension of disbelief he made us all complicit.

The wistful Küssen Kann Man Nicht Alleine (“One Cannot Kiss Alone”) is the name of his newest (and I think best) CD, written with the German songwriting sensation, Annette Humpe. Many of the songs that night came from that album.

The title song is one of the best examples of how Raabe pits disparate ideas against one another to jar the listener. It conveys the deep hurt the lover feels when that second, most essential person has gone AWOL:

With a cool hand, in both German and English, Raabe sings the sort of lilting songs that our grandparents danced to. In the end, these are almost all dance tunes. In bringing them back to our ears, I hope they find their way to our feet as well. They do find mine as I foxtrot, quick-step and paso doble around my living room alone.

Yes, you can dance alone. But how much better with a willing partner and a great kisser.

As in the reading of a post-modern novel, intertextuality plays a role in that Raabe creates a level of ambiguity and reference to other times, songs and places, allowing the listener to bring his own interpretation to the lyrics and the presentation of each song. By the night’s bittersweet ending, you feel as if you have been on an intimate journey with Raabe and his band of co-conspirators, the old world/new sound charm of the Palast Orchester.

One of my favorite songs is Ich Küsse Irhe Hand, Madame, from 1928. Raabe and the Orchester didn’t play it that night, but it’s on a couple of his CDs and you can find it on YouTube by many crooners, including Raabe, and a wunderbar rendition by Richard Tauber in a clip with Marlene Dietrich from 1929.

Flirty and charismatic as only certain seven-year old boys can be, Raabe exudes an innocence dripping with teasing playfulness in songs like Ich Bin Nur Wegen Dir Hier (“I’m Only Here For Your Sake”) and In Geheimer Mission (“The Secret Mission”), the rollicking Doktor, Doktor and the devastatingly lovely Du Weisst Nichts Von Liebe (“You Know Nothing About Love”):

The greater the love, the higher the fall,
Final collision is the fight for the sofa.

Now, what could that mean?

You don’t need to know much German to catch the meaning in some songs, as in Crisis:

Raabe’s and Humpe’s Lullabye is one I’m learning to sing to my seven-year-old charmer.

Swarms of birds in evening light play tag high in the skies.
Mama Gnu sings baby gnu old bedtime lullabies.
Sun has wandered far to Timbuktu.
Close your eyes so dreams may come to you;
Venus watches over us from outer space;
The moon stares down in disbelief at all that is taking place.
The ocean’s full of tired fish, the squids have gone to bed,
A whale blows bubbles from behind and suddenly turns red.

I think he’ll get it.