Bodies in poetic motion, clothed and not

“Fort Blossom,” performed at Bryn Mawr, is a fuller version of a work originated in 2000. 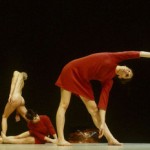 Nude men dance on a black floor, in subdued lighting; women on a white floor, in contrasting brightness.

The philosopher Ludwig Wittgenstein said, “Philosophy ought really to be written only as a form of poetry.” I am never happier than when I can read choreography as poetry, as I – and, I think, the audience – did over the weekend with choreographer John Jasperse’s Fort Blossom Revisited 2000/2012.

This fuller version of the original 2000 work premiered Friday at the Hepburn Teaching Theater, Bryn Mawr College’s black-box theater. The college was the leading funder of the reconstructed and expanded 60-minute work.

On the black side of the divided black and white floor, Ben Asriel and Burr Johnson dance completely nude in subdued lighting (designed by Stan Pressner in its 2000 premiere, now directed by James Clotfelder). On the white side, Lindsay Clark and Erika Hand dance in contrasting brightness, wearing thigh-high dresses the rich red color of cinnabar.

A combination of mercury ore and sulfur, cinnabar is as deliberate and precise a choice as every other element in this revised work. The set’s coloration is minimalistically mid-century moderne, sleek and beautiful. A compilation of Ryoji Ikeda’s eerie recordings made a complementary sound sculpture.

Ever since I saw Xavier Le Roy’s 1998 nude solo, Self-Unfinished, I’ve been thinking about the difference between seeing the naked body and the costumed body dance, and I’ve concluded that the skin is a costume. It hides and holds together everything that is inside, but it also exposes the kinesthetic awareness of the body in a way that even skin-tight fabric cannot. We like to see nude studies in museums and books, so why not live on stage, in three dimensions and in movement?

Jasperse packs Fort Blossom with information of a philosophically poetic and exploratory nature. He creates angular geometrics for the women’s dances and simulated sex between the men, in ways that make us question intimacy and our relationship to our own bodies.

Another startling and playful thing was the repeated zoomorphism of the dancers’ bodies. Asriel lies prone parallel to the audience. On the other side of the divide, Clark and Hand lie on their backs on clear plastic cushions, gyrating on them as if weightless in a gravity-free space. They harness themselves to the cushions, like turtles held upright, with legs dangling from their shells.

Asriel wriggles, wormlike, across the floor, the difficulty of the movement expressed in the tortuous rise and fall of the buttons of his spine. The women bend from the waist, triangulating their legs like flamingoes. The men carry each other at times, looking like camels bearing burdens.

In the upbeat final moments, the women swat the men with the cushions. Near the end, they bend their torsos over one another in a line and walk centipedelike. It seems Jasperse is asking us to see the human body not only as sexual and vulnerable, but also in relation to other species.