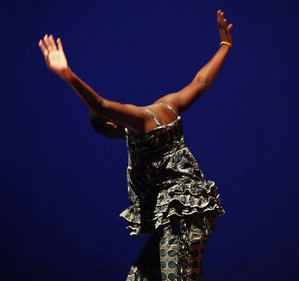 On Saturday night, Ishmael Houston Jones, Yvonne Meier, Meg Foley, Zornitsa Stoyanova, Manfred Fischbeck, Sharon Mansur, and Daniel Burkholder performed at Mascher Space Co-op. I made it to the Sunday night show at Mt. Vernon Dance Space; after seeing the caliber of Sunday night’s lineup, I was sorry I had missed the first performance.

Merian Soto has partnered with Marion Ramirez since 2003; they opened this contact-improv-based show with Circulations. In total silence, Ramirez, a beautiful mover, paced the space with increasing speed, spiraling her circles smaller until she reached center. She and Soto embarked on an exploration of the space, avoiding collision with each other as their breathing became labored, finally ending in a heap together.

Street Grace was Lela Aisha Jones’ poetic solo, beginning as a paean to a poem she thought her grandmother wrote. The little music box playing Schubert that she danced to seemed to represent the poem. Often just standing in place, she languidly led us through an evocation of many emotions, from hunger for beauty to acceptance of self.

At last, I got to see much-discussed Michelle Stortz, who danced a witty improvisation called Open Wide with Leah Stein. At times, they played like small animals, mostly communicating with each other via guttural sounds or visual signals in a language we all somehow understood.
Another wonderfully playful improvisation – between Sarah Gladwin Camp, of Green Chair Dance Group, and Gregory Holt – started out with a kind of rock-paper-scissors stare-down. Holt ran around, wildly flapping his arms like a madman wanting to shout his love from the treetops, while Camp sat watching impassively. In a magnificent moment reminiscent of Xavier Leroy’s nude Self-Unfinished, the fully-dressed Holt upended his legs over his upper back to touch the wall, head unseen, backside up, his arms and hands extended absurdly behind him, taking on a life of their own.

NOW! by Silvana Cardell was all about immediacy. She and her five dancers blocked and challenged, held and climbed over one another, as artist Jennifer Baker drew life-size impressions of them on six large easels. It was fascinating to see her stretch all over with her charcoal even as she watched and studied whatever phrases the dancers presented. Baker captured the whip-snap swing and sway of the choreography better than any words.