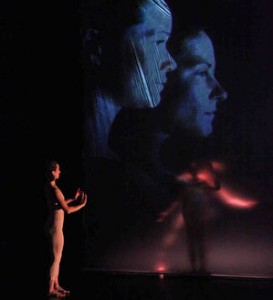 Performing “Chinnamasta: The Parts and the Whole” are (from left) Lesya Popil, Hedy Wyland, and Marie Brown.

Philadelphia’s dancers have built a community that’s the envy of other cities around the country. A Washington City Paper article last month cited Headlong Dance Theater as a ringleader, quoting one of its founders, David Brick, as saying, “You have to figure out how to do things on your own.” Sometimes that requires contorting into unlikely partnerships such as the one between Headlong, another long-established dance group, Group Motion, and Viji Rao’s newer Three Aksha. Their show, called “Sam-Gam BAM!”, opened at Drexel’s Mandell Theater last weekend and continues Thursday through Saturday.

Headlong is the postmodern, hipster/brainy dance company that relocated in Philadelphia from Wesleyan University in the early 1990s; German expressionist Group Motion had arrived from Berlin back in 1968. Traditional Indian dance company Three Aksha’s been around for the better part of the last decade.

“Sam-gam” – Sanskrit for “flow together” – is the title and overarching theme of the new works presented by the three companies, whose flowing together was pure serendipity.

“Group Motion had reserved the Mandell for two weekends,” said company director Manfred Fischbeck, “and since Headlong and Three Aksha inquired about the Mandell for the same dates, it made sense to join forces with the support of the Dance UP rental subsidy program.”

Headlong’s world premiere, I cannot tell you how to watch this, is actually an amusing primer on how to watch it, featuring Lorin Lyle as a referee and several dancers who form Headlong’s new ensemble springing off and melting into one another, contact-improv style. Headlong’s Amy Smith soloed in a classical Bharatanatyam dance taught to her by Rao, to jazz and country music. It was wonderfully quirky at first, though the quirk didn’t outlast the conceit, especially as a solo on a large proscenium stage.

After reprising a luminous 2003 work by Japanese choreographer Kenshi Nohmi, Group Motion provided the strongest work on the program. With an electronic score by Andrea Clearfield and live music performed by Tim Motzer, Thomas Wave and Fischbeck, the world premiere called Chinnamasta – The Parts and the Whole drew on the legend of the Hindu goddess who is self-decapitated. Text by poet and dancer/choreographer Jaamil Kosoko provided chilling monologues about greed, compassion, and sex.