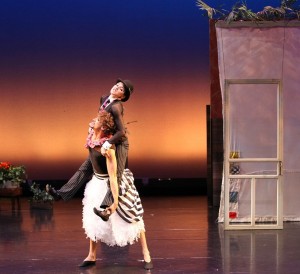 Weather-wise, spring is returning to Philadelphia in fits and starts. But inside the Wilma Theater Wednesday night the stage bloomed with potted flowers, campy song, loopy dance, and ballooning boobies. In Proliferation of the Imagination, a featured event of the Philadelphia International Festival of the Arts, those balloons actually popped – because the production is, after all, based on Guillaume Apollinaire’s 1917 play The Mammaries of Tirésias. And this first-ever collaboration between the Wilma Theater and BalletX, its resident dance company, milks the show to a mirthful froth.

Walter Bilderback, the Wilma’s dramaturg and literary director, and choreographer Matthew Neenan, who codirects BalletX with Christine Cox, pulled together a crack team of actors, dancers, musicians, stage and costume designers to pull off this contemporary version of Apollinaire’s gender-bending, proto-feminist, antiwar play after which he coined the term surréalisme.

Mary McCool plays Therese/Tirésias, who refuses to bear children and grows a beard, while Luigi Sottile plays The Husband, in black-and-white-striped bustle skirt and heels. BalletX member Tara Keating, looking oh-so-sexy in a bowler hat and pinstriped leggings, shadows him. And dancer Matthew Prescott, in curls, ruffles, and bustier to match The Husband’s, shadows Therese as she becomes more and more masculine.

All of this seems to be taking place in Zanzibar.