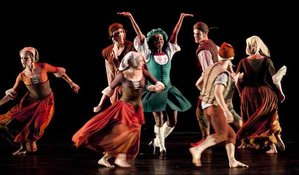 This season’s Dance Celebration opened at the Annenberg Center on Thursday with two Paul Taylor Dance Company favorites and a Philadelphia premiere made this year. Choreographies by Merce Cunningham, Martha Graham, George Balanchine, or Lucinda Childs, to name but a few, will always be instantly recognizable. But Taylor, who worked with Cunningham and Graham early on, did not develop such a distinctive new dance vocabulary.
Instead, he hewed to a mid-to-late-20th-century modern dance idiom and took on social, religious, and sexual issues, skewering at will. For me, Taylor’s best is Company B, in which he expertly juxtaposes the jauntiness of warmongering, the songs that feed it, and its primary product: death.