The Gdansk dance company Dada von Bzdülöw presents its second Live Arts Festival show inspired by a Polish writer. Last year it was Witold Gombrowicz; this year, the dancers make witty observations on another prankster author little-known here – Stefan Themerson, who first published the pataphysical works of Alfred Jarry in English under a press with a Latinized name for the Jabberwock. It helps to hear jabberwocky and Jarry clanging in your head to see where this show is going.

The wickedly playful intent of the piece kicked in with laborious lifts, and with company founder and dancer extraordinaire Leszek Bzdyl smiling. For the last year, Philly dancer Bethany Formica worked with the group for her role as a jaded ingenue in multiple, gorgeous costume changes. (Hiroshi Iwasaki designed the 1930s period costumes and Mikolaj Traska the jazzy music.) Katarzyna Chmielewska, also a founding Dada member, danced with reckless elegance in her schoolmarm-prim garb.

Mumpitz is German vernacular for “profound nonsense,” and Rafal Dziemidok solemnly brings things to that level. A big guy prancing bare-chested in suspendered pinstripe pants, he ends the piece baring his all, a perfect Live Arts/Fringe experience – if you know where it’s coming from.

Way Up High. Loose Screws is a wonderful name for a tap-dance company, referring as it does to the screws on tap shoes that must be loose enough to let the taps jiggle and click. Would that it also applied to the sensibility of the company’s artistic director, Jenn Rose, composer and associate director Dan Kazemi, and associate artistic director Megan Nicole O’Brien. Their show at First Unitarian Church of Philadelphia on Tuesday was sweet, girly, even new-agey in its attempt to portray the story of the dancer who represented the color black and deconstruct it into the colors of the rainbow. Hence, the title Way Up High, an allusion to “Over the Rainbow.”

The directors also hyped their 50-minute show as “uninhibited, risk-taking and new” and said that it fused contemporary dance with tap. In fact, the first 20 minutes consisted of outdated noodling around with flung-out arms and distressed facial expressions before the tap shoes even came out. And when they did, they disappointed in this missed opportunity to take the floor by storm. The shoes kept coming on and off, the arms kept flinging out as the seven girls turned and leapt. The music droned on without the rhythms that inspire great tap. There was little jiggle, and no click. 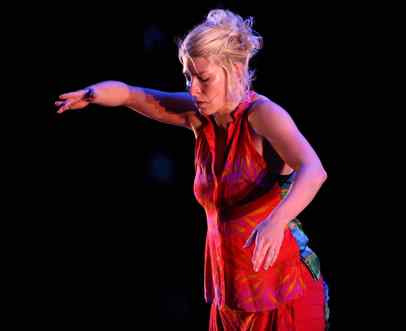 After 30 years at 2030 Sansom St., Susan Hess Modern Dance Studios presented its final concert there Sunday night. But instead of a wake, it was a celebration of the far-reaching dance legacy shaped in that space. Former Philly dancer Steve Krieckhaus came in from St. Louis to honor Hess, and so – surprise! – did famed global choreographer Lucinda Childs, whose spectacular 1979 Dance will have its Philadelphia premiere at this fall’s LiveArts Festival.Krieckhaus was one of many who went on to success through Hess’ 26-year-old Choreographers Project (others include Rennie Harris and Eric Schoefer). And Childs participated in Hess’ Masters Exchange series, also begun in 1984, which brought in dance icons including Deborah Hay and Daniel Nagrin…

At Thursday’s opening at the Arts Bank, Thai dancer/choreographer Pichet Klunchen and French dancer/choreographer Jérôme Bel faced each other across the stage. Klunchun, an adept of Khon – traditional Thai dance – lobbed answers to Bel’s incessant questions sincerely and succinctly, establishing an ever-more-ludicrous dialogue.

Bel assumed the role of a French nerd, droll and earnest, yet elegant and intelligent in this combination interview and lecture-demonstration, urging Klunchun to show the Khon technique. Klunchun performed what dancing there was, ultimately explaining that the movements represented architecture.

The architectural space between them represents the cultural gulf between their two cultures and dance philosophies. For despite Bel’s engagé protestations that there is no representation in contemporary art, (that would be, to paraphrase Bel, not “ici et maintenant” – here and now), everything represents something in this semi-farcical, semioticist wetdream.

At Klunchun’s behest, Bel demonstrates a section of his dance from The show must go on (next weekend at the Kimmel), standing almost perfectly still for several minutes à la John Cage’s 1952 4′ 33, in which the pianist simply sits for that length of time. Klunchun says he gets it. By the end of this cagey and Cagean show, you too get indeterminacy, phenomenology, structuralism and many other French “isms” you’ve been struggling with all these years.

8: Olive Prince and Shavon Norris. Olive Prince, a delightful dancer, choreographed quite a good piece Thursday evening with I Desire, one of eight new works by local choreographers for the Live Arts Festival. The pieces are being presented in four sets of two.

Marie Brown, Lindsay Browning, and Nora Gibson joined Prince onstage for I Desire, while Christopher B. Farrell’s compelling score moved them through with conviction. The dancers entwined themselves by turns in root-brown vines that hung from above. Prince repeated a motif using one vine for a support for deep back-bends and later did a little aerial work with it. This was not your girly maypole dance; all four attacked the meaty choreography with gusto. While Gibson brought her purposeful presence to the piece, Prince gave it its grace.